Authoritarianism and Inequality: The third Year of the Government of Iván DUQUE

Learner Lessons. A balance by Colombian Human Righs organization of the third year of the government of president Iván Duque. Executive Summary and Recommendations in English and Spanish. Debts on the implementation of the Peace Agreement, conflict, humanitarian crisis and human rights.
Menschenrechte

Debts on the implementation of the Peace Agreement, conflict,
humanitarian crisis, and human rights

A lack of integrity and syncronicity has been evident over the three years of the Iván Duque Márquez administration, along with the non-compliance, delays, defunding, absence of transparency, and access to information on the Peace Agreement’s (AFP) implementation. The structural and political violence persists, as does an expansion of militarization and thestigmatization of communities and organizations. In the meantime, the governmental strategy is revealed as a demonstration of AFP fulfillment based on a distorted version of demobilization, disarmament, and reintegration (DDR). This is in addition to presenting alleged advances in illicit use crop substitution programs, which has not implemented the alternative plans and instead forced eradication efforts and threats of aerial spraying intensify. At the same time, the agrarian jurisdiction is left in limbo, along with the transformative potential behind the action plans to transform the territory (PATR), the political reform, guarantees for the right to peacefully protest, the economic, social, and political reincorporation, and an implementation of the ethnic
chapter and gender approach.

To read the executive summary and the recommendations in spanish or english or to see the full report in spanish see:

To see the chapter on the New European Agenda with Colombia go to: 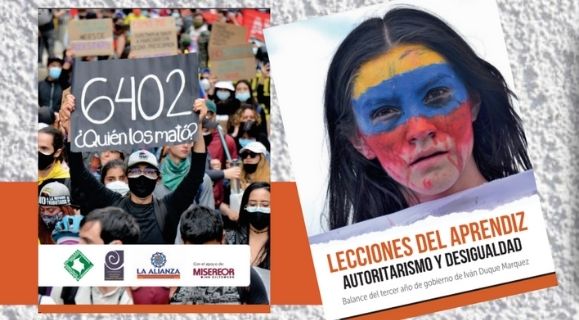