Bogota (ICRC) – Violations of humanitarian law, including forced displacement, threats of violence, rape and damage to civilian objects, have increased in Colombia, the International Committee of the Red Cross (ICRC) has found. In presenting its report today on its activities in Colombia in 2011.
Krieg und Frieden | Menschenrechte 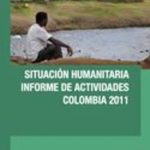 Bogota (ICRC) – Violations of humanitarian law, including forced displacement, threats of violence, rape and damage to civilian objects, have increased in Colombia, the International Committee of the Red Cross (ICRC) has found. In presenting its report today on its activities in Colombia in 2011, the ICRC seeks to remind all parties to the conflict of the importance of strictly respecting the rules of international humanitarian law.

„We’re concerned about the deteriorating situation in some areas,” said Jordi Raich, head of the ICRC delegation in Colombia. In many cases, he noted, fighting has intensified, making it harder for remote communities to obtain basic services such as health care, education, clean water and transportation. “We’re very concerned to see that many people living in ‘the other Colombia’ are increasingly fading from public view.”

Interview with the head of Colombia delegation

In 2011 the ICRC documented more than 760 alleged violations of international humanitarian law and other basic standards committed by all parties to the conflict in Colombia. More than 150,000 people benefited directly from the ICRC’s work. The organization provided emergency aid for displaced people, access to health care, and support for local infrastructure projects. It helped return the bodies of the dead to their families, paid funeral expenses, moved people to safer places when they were threatened, and facilitated the release of hostages held by armed groups. ICRC delegates also visited detainees. In many cases, these activities were carried out in collaboration with the Colombian Red Cross.

The regions affected by an upsurge in violations were: Cauca, Nariño, Chocó, Antioquia, Córdoba, Putumayo, Caquetá, Meta, Guaviare and Norte de Santander. In cities such as Medellín, Tumaco and Buenaventura, people are suffering from the effects of the conflict and other organized violence.

„Armed men came into my house,” said one of the victims helped by the ICRC in 2011. “I was alone with my 10-year-old son. They started accusing me of collaborating with the other side and said I had to tell them what I knew. Then three of them raped me. The others did nothing – they just watched. When it was all over, my son and I fled to the city. We walked for 12 hours.”

The ICRC also documented cases in which aerial spraying of illegal crops destroyed the legal crops on which communities in conflict areas depend, depriving them of food and a means of livelihood.
In 2012 the ICRC will continue working in isolated areas of Colombia. The recognition it enjoys as a neutral, impartial and independent organization will enable the ICRC to respond effectively to the needs of victims in these areas. In particular, the ICRC will endeavour to raise awareness about violence affecting health care, including attacks on patients, medical workers and facilities, and medical vehicles.

Through its delegation in Bogota and its offices in nine other Colombian cities, the ICRC will also continue to address the consequences of other forms of violence in urban areas.