Support from the international community is crucial for the peace agreement in Colombia. 5th Anniversary.

The organisations that have signed this press release celebrate the fact that 24 November 2021 marks the fifth anniversary of the Peace Agreement between the Colombian Government and the Revolutionary Armed Forces of Colombia – People’s Army (FARC-EP), which put end to an internal armed conflict that left more than nine million victims and that lasted more than fifty years.
Aktuelles | Deutsche-/EU-Politik | Krieg und Frieden | Pressemitteilungen | Veröffentlichungen

The signing of the Peace Agreement in Colombia filled the country and the world with hope. There was an immediate decrease in rates of violence, a positive and tangible result of the Agreement’s early implementation stages. This highlighted the importance of swiftly implementing the contents of the Agreement to ensure lasting peace.
Five years on, Colombian society continues to show it wants to make this transition towards peace: the mass citizen demonstrations in recent years related to social issues and the boom in electoral participation are indicators of this. There has been some progress in implementing the Agreement: the mechanisms of the transitional justice system are operating and are yielding their first results. In June 2022, the report of the Commission for the Clarification of Truth, Coexistence and Non-Repetition is set to be launched. There are, however, serious concerns about the delays in implementing fundamental points of the Agreement, serious violations of human rights and the deterioration of the humanitarian situation in Colombian regions, disproportionately affecting ethnic minorities and small-scale farming communities.
The Chapter on Comprehensive Rural Reform addresses land inequality and the lack of regulation in land tenure, one of the structural causes of the conflict. Nevertheless, it is this Chapter that has the lowest level of implementation: less than 5% to be precise. The gender focus, which marked the Colombian Agreement as one of the most advanced in history in terms of the rights of women and members of the LGBTI community, has seen barely 23% implementation1. The ethnic focus in the Agreement has been deprioritized since the negotiation phase and the opportunity to move towards ending the historical exclusion of ethnic peoples is being lost due to this lack of implementation.
Since the signing of the Peace Agreement, 292 former combatants in the process of reincorporation and 594 human rights defenders have been killed2, in many cases these people were working to build peace and implement the Agreement in different regions of Colombia. The violent repression of the public protests in 2020 and 2021 is a sign that the response of both the Government and the state security forces to social demonstration is through military confrontation, due to the lack of structural reforms that would enable Colombia to have a security force fit for peace and guaranteeing democratic participation.
1 Kroc Institute 2020; Informe Especial sobre el Seguimiento del Enfoque de Género; 23 % of measures have médium or advanced progress in their implementation. In 77 % of measures progress is minimal or there is no progress in their implementation.
2 Cumulative figures from the SIADDHH Report 2016 (figures as of 24/11/2016); 2017 Report; 2018 Report; 2019 Report; 2020 Report; Mid-Year Report 2021
We therefore call on the European Union, its Member States, Switzerland, Norway and the United Kingdom to: 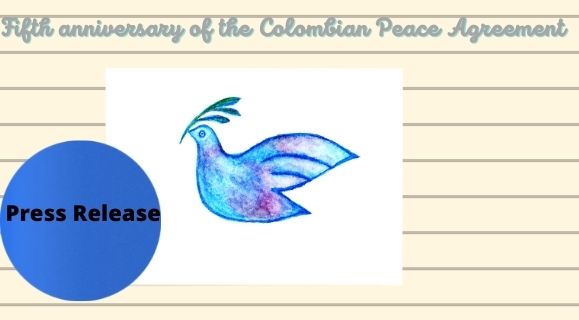